Well, of all the crazy things I have ever seen, this may take the cake. A bleeding glacier? 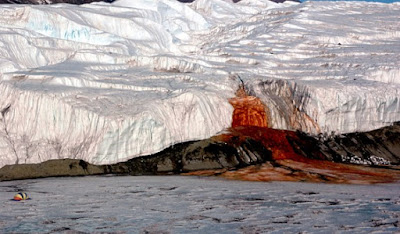 Nope. Its iron rich water created by bacteria in an underground lake. Really...

A bleeding glacier. Discovered in 1911 by a member of Robert Scott’s ill-fated expedition team, its rusty color was at first theorized to be caused by some sort of algae growth. Later, however, it was proven to be due to iron oxidation. Every so often, the glacier spews forth a clear, iron-rich liquid that quickly oxidizes and turns a deep shade of red. According to Discover Magazine –


The source of that water is an intensely salty lake trapped beneath 1,300 feet of ice, and a new study has now found that microbes have carved out a niche for themselves in that inhospitable environment, living on sulfur and iron compounds. The bacteria colony has been isolated there for about 1.5 million years, researchers say, ever since the glacier rolled over the lake and created a cold, dark, oxygen-poor ecosystem.

Even weirder: scientists think that the bacteria responsible for Blood Falls might be an Earth-bound approximation of the kind of alien life that might exist elsewhere in the solar system, like beneath the polar ice caps of Mars and Europa.

Email ThisBlogThis!Share to TwitterShare to FacebookShare to Pinterest
Labels: blood, glacier, off topic