I've started to do some "Throw Back Thursday" (#TBT) type updates of old posts. This is a fun concept from Instagram and Facebook, and I thought I'd try it here.

This is one of my first case study blog posts back in 2010 while I was working with Strategic Communications Group. We did some of the first social media based campaigns and wanted to evangelize the concept with other technology and telecom companies.

One of our goals as an agency in 2009 was to build up some compelling case studies on social media that we could share with our clients and our prospects. We’ve used social media to engage, educate, and entertain key audiences, and generate measurable results for a variety of customers. A few seemed to stand out as particularly good examples of how social media can be used to support a variety of business applications like lead generation, sales cycle support, customer service, employee morale, influencer/media relations, etc.

What do you think? I'd love hear your thoughts- leave a comment if you have a moment...

Situation
In the United States, British Telecom (BT) sells connectivity to Global 2000 companies. Connectivity is a commodity that prospects typically think about only when they need more—for example, when expanding facilities, whether domestically or in another country.

Goal
BT wanted to boost top-of-mind awareness, so when potential customers need to add telecom capacity, they consider BT. If not exclusively, then at least in addition to giant firms like AT&T and Verizon—which have far more advertising dollars to spend.

Solution
BT has a strong commitment to Corporate Social Responsibility (CSR). Knowing that virtually all of BT’s prospects have CSR programs, Strategic created a CSR blog where BT’s thought leaders can interact with like-minded people in other firms, including top-tier prospects. Through targeted social media interaction with key customers and prospects, building deeper relationships with customers like PepsiCo and Wal-Mart becomes a bit easier.

Results
CSR Perspective serves as a bridge, allowing BT’s field marketing force to stay in front of key prospects with shared values. A typical scenario: BT’s CSR executive reaches out through social media channels to counterparts at prospect’s organization and arranges a sales meeting with a prospect’s CSR exec and CFO. Thanks to relationships like these, when prospects need connectivity, BT is on the short list.

#TBT: Government Marketing in an Age of Social Media 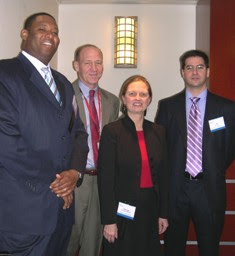 I've started to do some "Throw Back Thursday" (#TBT) type updates of old posts. This is a fun concept from Instagram and Facebook, and I thought I'd try it here.

This is one of my first blog posts back in 2007. Pretty terrible, no headline, etc.

Clearly, the impact of social media has changed from those early days.

...I recently moderated a panel discussion at a AMA-DC event in downtown DC entitled "Government Marketing in an Age of Social Media". The panelists (Jay McCargo, Toni Lee Rudnicki and Mark Root) were in general agreement that there has been minimal impact of "social media" among government marketers. However, all three agreed that web 2.0 marketing techniques will become more acceptable in time among the government contracting community.

After the winter we have had, I'm heading outside to rebuild my Vitamin D stores.In the meantime, here are this month's five must-read marketing articles:
If you have a few marketing priorities that aren't getting enough attention, email me and we'll schedule a quick call to review Honeycomb's capabilities.