You really have to hand it to the fine folks at the Federal Emergency Management Agency (FEMA). Two years after the massive destruction of Hurricane Katrina exposed the incompetence and disorganization at DHS in general and FEMA in particular, FEMA had been getting its act together and by all accounts acquitted itself alright in response to the southern California fires over the last few weeks. Now, we find out that these geniuses decided to organize a fake press conference.

FEMA held a press conference on Oct. 23 to respond to fake questions about the real wildfires in California. Here's how it happened: Real reporters were only notified 15 minutes in advance, so all they could reasonably do was call in to a conference line. But the line was set to "listen-only" mode, so asking questions was out of the question. Only the people there — a group consisting almost entirely of FEMA public affairs employees — could grill FEMA representatives.

None of this was disclosed by Vice Adm. Harvey E. Johnson, the deputy administrator of FEMA, who dutifully responded to the softballs from his underlings (i.e. "Are you happy with FEMA's response so far?") as if they were real.

To his credit, Homeland Security Secretary Michael Chertoff lambasted FEMA after the story broke in the Washington Post several days later. "I think it was one of the dumbest and most inappropriate things I've seen since I've been in government," Chertoff said. "I have made unambiguously clear, in Anglo-Saxon prose, that it is not to ever happen again and there will be appropriate disciplinary action taken against those people who exhibited what I regard as extraordinarily poor judgment."

John P. "Pat" Philbin, the now former FEMA director of external affairs who participated in FEMA's fake press conference last week by posing as a reporter and asking a question, has reported to work today at the Director of National Intelligence headquarters in Washington, according to a DNI official.

Philbin was tapped to take over as the head of public affairs for Director of National Intelligence Admiral Mike McConnell before the controversy erupted. But now his new job could be in jeopardy. "He is in meetings" and those who hired Philbin "are looking into the situation," the DNI official said.

*** UPDATED *** Philbin will NOT be director of public affairs for Director of National Intelligence Mike McConnell.

Philbin was hired to be Director of Public Affairs for the Director of National Intelligence before the fake FEMA news conference ever happened. His first day was always scheduled to be today.

But when he showed up to work today, instead of being sworn in, he went straight into meetings with DNI officials

Now, according to the DNI statement just released, Philbin will not be taking over the job. The statement does not say why, but privately DNI officials say the feeling at DNI headquarters was there was no way he could assume public affairs duties after what happened at FEMA.

This is a satellite shot of FEMA personnel's careers going up in smoke... 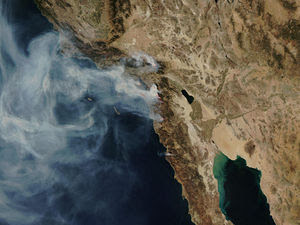 This is a valuable blog for understanding what's going on out there, and I'll be coming back.