Here are the articles and posts I've been reading...quite a hodgepodge. Read anything interesting lately? Send me the link at jeff@honeycomb-consulting.com


The 5 Pillars of Social Media Strategy by Brian Solis, on the Networking Exchange Blog

The 8 Keys to Successful Branding - Why 'Mad Men' and Whisky Are Not Going To Cut It by Matt Symonds, Forbes


Why the surge in obesity? - Consider the Evidence

Summary- the obesity epidemic started in 1980. The only variable changed around the same time is Calories in the Food Supply. Everything else that can plausibly explain the nation's weight gain- levels of exercise, hours spent TV watching, sedentary jobs, daily commutes in cars- aren't correlated with the change in adult obesity rates around 1980. Basically, everyone in America started eating more, a lot more, around 1980.

St. Bernanke's Fight Against the Deflation Dragon By Lance Roberts of Streettalk Live

Excuse me for geeking out on the economics front for a moment, but this is an excellent article on, what I think is a very much overlooked part of our troubles, the collapse of the velocity of money, which has happened despite the huge increase in the supply of money. Something for all you tea partiers to chew on... 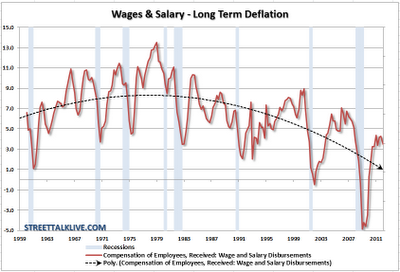 Kind of hard to blame rising inequality on recent events, when this is a trend that started in the late 1970's. Which is also when people started eating too much and getting fat. Coincidence? Correlation?

And check out the middle finger on the gentleman's book cover. LOL


There's no denying it—our kind started substituting brains for brawn long ago, and it shows: We can't begin to compete with animals when it comes to the raw ingredients of athletic prowess. Yet being the absurdly self-enthralled species we are, we crowd into arenas and stadiums to marvel at our pathetic physical abilities as if they were something special. But there is one exception to our general paltriness: We're the right honorable kings and queens of the planet when it comes to long-distance running.

Very interesting article that you’ve posted. Found the views to be quite informative and intriguing. Thanks for sharing.