Since my credibility is now un-impeachable, earlier this morning I proclaimed the coming energy crisis to be over, even though crude oil prices are spiking up over $85 today.

I never thought I'd be proven correct so soon, but, woops, here is the proof:

A new report from the Pentagon's National Security Space Office (NSSO) postulates that space-based solar-power platforms could begin fulfilling planetary demand for electricity by 2050. The report noted that while significant challenges remain, the technologies for making extraterrestrial relay stations a reality "are more executable than ever before and current technological vectors promise to further improve its viability."And then there's this jaw-dropper: "According to the NSSO's Space-Based Study Group, a single kilometer-wide band of geosynchronous earth orbit experiences enough solar flux in one year to nearly equal the amount of energy contained within all known recoverable conventional oil reserves on Earth today." (bold added)

This takes a bit of the sting out Da Bears horrific loss yesterday to the Minnesota Vikings. Da Bears gave up 311 yards rushing to the Vikes. 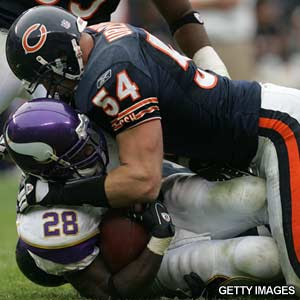