Hi all, busy bee here in sales land...so just a few random links that have popped onto my radar screen today.

First, Jason Falls gives his perspective on the 10th Anniversary of the Cluetrain Manifesto. Jason has some very perceptive comments. Here is a snippet:

Before I respond to the specific questions, though, a raw perspective:

We’re nowhere. Social media and true consumer-centric brand behavior is prevalent in the technology bubble and few other places. While adoption has been steady and progress has been made, the premise of the book hasn’t exactly “gone viral.” Businesses in general still think bottom line and “what’s in it for me,” first. Advertising still sucks, is loud and intrusive. And consumers still have little reason to trust brands, companies and even folks like me – marketers trying to connect them with products and services that fit their needs.

I’m still a used car salesman to a lot of people. Companies are still monolithic, smoke and mirrors, money hoards with automated phone systems and customer service that has nothing to do with the customer and scantly qualifies as service.

For a market-changing, environmental-shift of a document The Cluetrain was, either it actually wasn’t or the majority of American businesses and consumers are just plain dumb.

To me, The Cluetrain is logical. Be nice. Expect it in return. Why can’t we get this, people?

That said, some people are getting it. More every day. It’s a fight worth fighting. We’re trying to teach business and industry that they should do right because it’s the right thing to do. And someday, we’ll win. When we do, we all will.

For those of you who don't know about the Cluetrain, get all the money you have hidden under the mattress, head down to Union Station and hand it out to passersby. Then go home, read up and form an opinion one way or the other.

Chris Brogan write yet another post with 17,000 comments. This time he vents about a PR idiot blind emailing a press release. Hilarity ensues.

Dennis McDonald goes dsystopian and foresees Facebook fascism as those crazy kids only know how to live while connected.

And finally, the reason why social media has a cap in terms of the number of people who will embrace it. People are risk adverse and are afraid of looking like asses...which is something the Internet was seemingly designed to do... 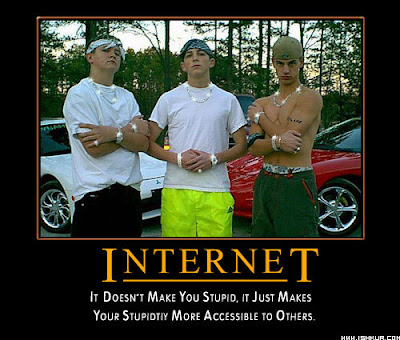